NACS and PROCESS EXPO Fight Hunger in Their Host Communities 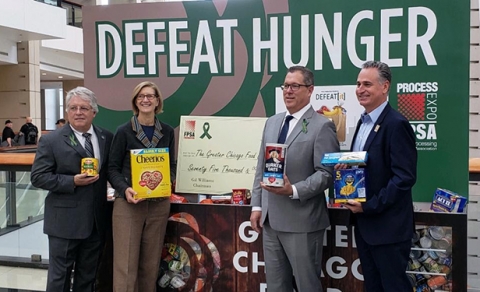 Two trade show organizations are doing their part to combat food insecurity within the communities that host their events.

For the fifth year in a row, NACS teamed up with Tyson Foods to show support for the host community of the NACS Show, the annual trade show and conference for the global convenience and fuel retailing industry. Held Oct. 1-4 at the Georgia World Congress Center in Atlanta, the show donated 4,774 cases (38,526 lbs.) of assorted Jimmy Dean and Hillshire Farm products to the Atlanta Community Food Bank.

“There are more than 153,000 convenience stores serving communities across the United States, and cumulatively NACS retail members contribute over $1 billion a year to charity,” said Jeff Lenard, NACS vice president of strategic industry initiatives. “Our industry also has exceptional supplier members that are also actively giving back to the community, and we’re proud to partner with Tyson Foods to support the Atlanta Community Food Bank.”

“We are so thankful to receive this generous donation from our partners at Tyson Foods,” said Kyle Waide, CEO and president of Atlanta Community Food Bank. “This donation will provide 32,105 meals to those in need. By raising awareness of the hunger that lurks in front of us, we can work together to reduce this number by providing meals to those who need them most.”

From thousands of food bank donations and grants to community organizations over the years to hunger-related volunteerism, Tyson Foods remains focused on hunger relief efforts. In 2015, the company pledged $50 million in cash and in-kind donations by 2020, with a special focus on local initiatives, according to Tyson Foods officials.

“Partnering with organizations like the Atlanta Community Food Bank and NACS is important to us in raising awareness about food insecurity in communities all around the United States,” said Nancy Todys, senior manager of convenience channel development for Tyson Foods. “In the greater Atlanta community, programs supported through the Food Bank serve more than 85,000 people each week and we’re honored to be a part of those efforts.”

To support convenience retailers in their efforts to reduce food waste and provide hunger relief, NACS also works with organizations such as No Kid Hungry and Feeding America.

As part of its DEFEAT HUNGER campaign, the Foundation of the Food Processing Suppliers Association presented a check for $75,000 to the Greater Chicago Food Depository at PROCESS EXPO, held Oct. 8-11 at McCormick Place in Chicago.

The generous donation will be used to help the organization provide meals for those who need them while ending hunger in the greater Chicago area. Since its inception in 2013, the Food Depository has served more than 1 million meals to those in need.

“Today, I am honored to present a $75,000 donation on behalf of the FPSA Foundation to the Greater Chicago Food Depository,” Gil Williams, chairman of the FPSA Foundation, said at the presentation. “Throughout the rest of PROCESS EXPO, we will continue to collect food and monetary donations from our members.”

During the show, PROCESS EXPO exhibitors donated food products and monetary gifts to help the campaign, which is part of the FPSA’s Giving Back Initiative. This year, two pizza companies, Nations Pizza and CBM Global, donated tens of thousands of frozen pizzas to DEFEAT HUNGER.

“We are extremely grateful for the FPSA’s investment in our organization and for the important opportunity this provides us to make an impact in our community,” said Jill Zimmerman, vice president of development for the Greater Chicago Food Depository. GCFD works with more than 700 organizations and programs serving people facing hunger in Cook County.

She continued, “When they came to us six years ago, we had no idea how amazing this partnership would be. FPSA is ‘all in’ raising money and donating product to help us meet the great need for food in Chicago.”